As natural as it gets – the RAW wine fair

The London International Wine Fair is held every year in May. I’ve only been twice, to be honest, but I felt I had seen enough. This year I wanted to try something different, so I went to the counter-expo instead: RAW, the artisan wine fair. It was a great decision! Not so much because the wines were great but for a number of other reasons.

First of all, the scope of the whole thing was much smaller (although a lot larger than I had expected). I still had over 170 stands to visit and in the range of 700 wines to taste. I didn’t manage… In any case, smaller is better because there is a much more personal feel to the whole event. You could see the people who were behind it all. You could talk to the producers themselves (some producers are also present at the LIWF but here I only met producers behind the stands. 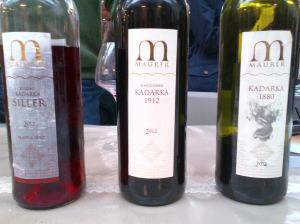 Secondly, I had a sense that these people really take their wine business seriously. In a nice sort of way.  The quality of the wines is a separate question, although I don’t think there was any reason to complain. But the commitment, the motivation, the greater ideals behind these wines clearly showed, and it warmed my heart.

Third, I learnt a lot. The wines, at least some of them, were so different, they forced you to think outside the box. Some of the regions, for example, Georgia and Slovenia, were totally new to me. I was exposed to wine-making philosophies, colours, aromas and flavours that I had never known before. I’m not saying I loved everything I saw or tasted, but the wines, and the whole event, had a character, and I felt engaged, even provoked. I loved this.

And now about the, to me, most challenging aspect of this whole natural wine phenomenon: the question of sulphites. In my understanding natural wine, in its strict definition, cannot contain any added SO2. This doesn’t sound so terrible in principle, but when I tasted the wines, I was shocked. My palate didn’t know what to do. I’d like to put it down to the flavours simply being unfamiliar, and I am trying to be open-minded about the whole thing, but if I want to be totally honest I’ll just have to say that some (in fact, most) of those wines were simply bad. Bad, off, smelly, oxidized, out of condition, vinegary, unbalanced, shall I continue? Now of course one can learn to like any bad smell of flavour – the pungent, rotten cheeses of the world come to mind. Still I feel there is a difference here. I sat through a session on the topic, listened to people raving about the wines (and how they age well and travel well, which may or may not be true, to me it’s beside the point), and came to the conclusion this was a religion, and those speakers were preaching to the converted.

One thing, however, I must give these wines credit for. They are impressively alive. Natural wine experts say, and in theory I agree, that SO2 kills the fruit, wipes out all life from the wine, freezing it into some kind of sterile, soulless, paralysed existence. Certainly, none of this is true for sulfur-free wines. They have a dynamism about them that surprised me. But then I am reminded of my garden at home. It’s a mess, it’s a jungle. Everywhere is covered in weeds. I just don’t have the time to tend to it. This is its natural state. It’s alive, it’s bursting with life; it even has a rough romanticism about it. But would I call it beautiful or pleasant in comparison to the well-groomed garden of my neighbour, whose lawn is mowed, whose hedges are trimmed and whose flowers are not suffocated by dandelions? I would not.