Koshu – made in Japan

A single grape variety, from a country that I never thought had its own grapes. Koshu is the name of a white grape, but also of a town in Japan around which it is grown and the wine produced. Koshu is a small town not far from Tokyo, in the Yamanashi prefecture. On the map below, the area is marked orange. Its main claim to fame is its wine production, from this one grape – a single wine but many nuances. 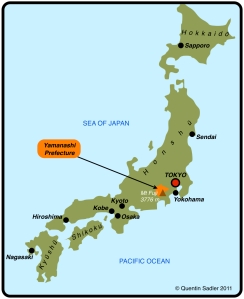 Koshu is probably not the most exciting or unusual grape variety you’ve ever encountered, but it seems to be surprisingly versatile and it does a great job at producing reliable, enjoyable, fresh white wines, some of it sparkling. At this tasting held in February 2014 in London, eleven producers showed around thirty wines. Some were lees-aged and richer, spicier, more complex, while others had a neutral, subdued style, and again others a lot of youthful fruitiness with candy sweetness. In general, most wines were young with relatively low alcohol levels (could be a great plus in the growing fashion of low-alcohol wines), and without a lot of perceptible acidity, although according to the descriptions tartaric acidity levels are in the range of 6g/l (which is fairly high).

Koshu is a bit of a mystery grape. In Wine Grapes, Jancis Robinson, Julia Harding and Jose Voulliamoz write that while the Japanese claim the variety as their 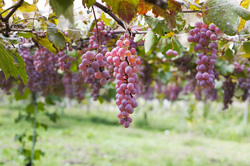 own, this is hard to justify as it comes from a species that is not indigenous to the island. It seems likely that it was either introduced from Eurasia or crossbred from indigenous Japanese varietals. The bottom line is that, so far, scientists have been unable to relate Koshu genetically to any other known grape variety, so its exact origin remains unknown.

So how did the Japanese start making wine? The Koshu of Japan website tells us that “winemaking in Japan was started in 1874 by individuals living in Yamanashi Prefecture’s Kofu City. The first winery where full-scale wine production began was established in 1879. The Dainippon Wine Co., Ltd., founded in 1877, had sent two young men to France. What they learned there led to the start of wine production in Japan using the local Koshu grape… Following the end of World War II, wine production increased dramatically. There are now 80 wineries in Yamanashi Prefecture.”

The two producers I particularly liked at this tasting were Aruga Branca and Kurambon.

Quite fruity nose with yeasty notes. The wine was aged on the lees for 36 months, and underwent 3 further years of maturation after disgorgement. Light-bodied, low in alcohol and with a good backbone and sharp mouthfeel, but a richness of flavour, almost rum-like. 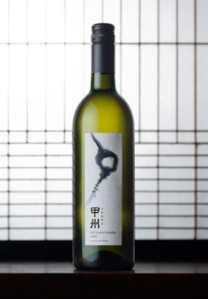 Lees influence quite prominent on the nose, together with citrus fruit. Savoury palate with slightly more intense acidity. Subdued style but with lots of mineral notes, especially on the finish.