Tasting around the world, Winemaking March 15, 2017 Leave a comment

The word that would best describe my initial relationship with Sherry is probably incomprehension. It was no love at first sight. On the few occasions that I tasted it, it always struck me as a weird drink. Here I’m talking about dry Sherry, as sweet ones held little interest for me. Sherry has hardly any acidity but is nevertheless super-dry; and it baffles you with strange flavours unfamiliar to drinkers of regular light wines – flavours that I might even say would be considered faults in a light wine. But when I had to taste one Sherry after another in preparation for my fortified wines exam, it started to grow on me. I started to enjoy its nuttiness, its quirky characteristics, its oily texture. And what constantly kept astonishing me was how cheap Sherries were compared to other drinks of a similar calibre.

So I was extremely pleased when I heard about the Sherry masterclass that was taking place under the auspices of the Wines from Spain annual tasting in London. It seems I was not the only one who had a soft spot for Sherry: even though I turned up 15 minutes early, the hall was already full, with standing room only. Not exactly what I’d expected, but I stayed anyway, and I’m glad I did.

I don’t want to go into much detail about how Sherry is made, as that was not the focus of this masterclass. But I will mention some aspects because I learnt some interesting facts from Sherry specialist Beltrán Domecq, who presented us with a fascinating overview of the development of Sherry from a young, neutral base wine into a highly complex, mature drink. So, one of the interesting facts I learned was that the tradition of increasing the alcoholic strength of wines by the addition of spirits (the key act in the production of fortified wines such as Sherry, Madeira and Port) goes back as far as a thousand years. The purpose was not to get you drunk more quickly, but to stabilize the drink. The higher the alcohol content, the less likely the wine was to go off. But it was really only in the 16th-17th centuries that fortified wines enjoyed a boom: wit

h the discovery and colonization of distant lands and the massive increase in long-haul sea voyages, wines started travelling and when they were fortified they travelled much better. Sherry, it turns out, was the first wine to circumnavigate the world, in the famed voyage of Magellan and his crew that started in 1519. It was apparently 300 years ago that the solera system was introduced, to create uniformity in quality and style.

I also learnt how the word Sherry came about. The place name changed from Xera to Ceret under the Romans, then to Sherish under Muslim rule in the 8th century. It then became Xeres de la Frontera under Alfonso X, who reconquered the land from the Muslims. From Xeres it was only a small step to Xerez in the 16th century, which today is written as Jerez. As many wine merchants, including a lot of Brits, established themselves in the region, the name of the wine became known in its anglicized form as Sherry.

The production of dry Sherry consists, very briefly, in the following basic steps: 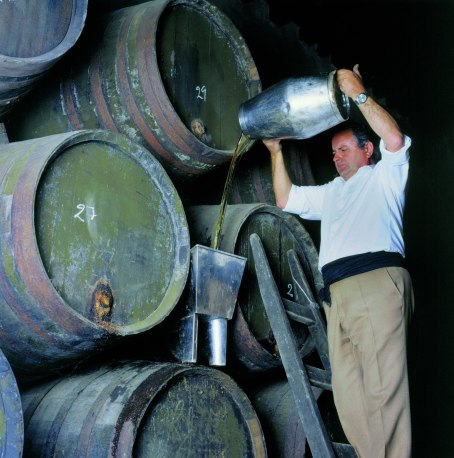 What we did in this tasting, though, concerned only the part that came in and after step 5. With ageing, not only did the wines take on darker and darker shades of gold and then amber; they also developed new characteristics and lost old ones. So the fruity-neutral, pale lemon base wine (Barbadillo 2016) gradually turned into a golden, very dry drink -in our tasting, it was an Ynocente Fino – with flavours of toasted nuts and seeds. The American oak (a rather unconventional solution for Sherry, I would have thought) lent the wine a noticeable woody character. The dryness of Sherry, I learnt, is caused by the disappearance of glycerol from the wine (it gets eaten by the yeasts). The next step up: a darker golden wine in which the nuttiness becomes more prominent and the wood less so (Fino Tradicion by Bodegas Tradicion). Our next wine, an amber-coloured 12-year-old Amontillado of Willams & Humbert was a special treat: the acetaldehyde aromas and flavours so typical of fino Sherry begin to go down at such a mature age. Other flavours are becoming more and more evolved and concentrated: candied, toasty notes on the nose and palate, rich, mouth-filling texture.

The older the wines the more concentrated they become because thanks to the porous texture of oak barrels, water can evaporate through the walls of the barrel but other, larger molecules remain. The first of our last, seriously grand wines was a Fino Imperial Merito Amontillado, aged for 30 years. VORS on its label stands for Very Old Rare Sherry, and old and rare it was, with lots of depth and a complex, rich, medicinal character. To wrap it all up, we tasted a Harveys 30-year-old VORS Palo Cortado. Medium amber, this wine was the first to exhibit a degree of sweetness. It was creamy and beautifully nutty, had a rich fruitcake palate and pretty high alcohol (19.5%), and a toasty, woody finish.

I also learnt from Mr Domecq that Fino and Manzanilla Sherry should not be kept for more than a year after purchase, and that once opened, they should be consumed within a week. Other, more mature Sherries can be kept for up to 3 years. They like to be stored in a standing, upright position, and they should be served chilled: 5-7 C for Fino and Manzanilla, and 14 C for the more mature wines are optimal temperatures. And please serve your Sherry in a proper wine glass!

If you’re as enthusiastic about Sherry as I am, you’ll be pleased to know that International Sherry Week is coming up in November 2017. To find out more click here.

Time for a new Experience?

The Kosher Food and Wine Experience (KFWE) is an evening of (supposedly fancy) food and wine, organized every year around February by Kedem Europe. It takes place in central London but also has sister events in Paris and in various venues in the United States. I’ve been going to this event for about six years, and I regret to say that not much has changed since I first attended in 2011. Or, rather, not enough has changed. To be fair, there have been a few developments. One, they’ve started doing tasting workshops, which is a much-needed gap-filler. Jews need to be educated about wine, and equally, non-Jews need to be educated about kosher wine. While I have some misgivings about the quality of these workshops, I’m pleased they are happening and I wish they were available all year round.

The foodie attitude is now tangibly present within the Jewish community, and I don’t only mean the modern segments but also the more right-wing groups (haredim, or the strictly Orthodox). Many haredim apparently have the money a) to attend this rather pricy event – tickets go at £50 each – and b) to buy more expensive stuff than the standard kiddush wine. The foodie approach is, however, limited for now to externalities. If it’s a trendy caterer, that’s cool, and if they serve sushi, that’s ‘in’. They’ve served sushi for the past six years. I say, it’s time to move on and try something different.

As for the wines, the selection has been expanding. My favourite part of the event is going around to see who is new. I skip the big shots, e.g. Herzog or Carmel or Binyamina, and look for the unknown names. This year I’ve discovered a handsome Italian winery called Cantina Giuliano, run by a young couple in Tuscany.

Their wines are still young and so are they, which means they haven’t got tremendous experience, but they are a nice addition to the international kosher wine palette. And it’s always heart-warming to see a small family winery (and Jewish too!) spring up in such a historic wine region. Their grapes are the traditional local ones, for instance Vermentino, Sangiovese, and Ciliegiolo; and their winemaking also reflects local tradition.
If you visit their website you’ll see that Giuliano is a well thought-out business with a clear sense of purpose. Their selection of wines is small, which could reflect a traditional outlook on winemaking: stick to grapes and styles that are local, or it could be down to the fact that they’re still growing. Giuliano also offer locally produced food in their restaurant, wine tours, and kosher accommodation.

I’ve tasted their full current range: a white Costa Toscana IGT made from Vermentino grapes, with a fantastic, rich bouquet, floral and fruity flavours and upright acidity. Primizia is their DOCG Chianti, which was aged only in the traditional tonno vat. The 2014 vintage is fresh and fruity with a hint of smokiness. The 2015 vintage has a completely different character: it is very perfumed and soft. Their Costa Toscana IGT red, called Gioia, is an enjoyable blend of fruitiness and ageing. A winery to look out for – and to visit when you’re in Tuscany!

Matar, an Israeli brand, was my other favourite discovery this year. Matar is the kosher range of Pelter, a well-known winery who otherwise produce non-kosher wines. Their wines are spot on, made to a very high standard. I tasted their Cumulus 2013, a red blend with the sort of nose I love: spicy and peppery, with a prickly green, nettle character. On the palate it was soft yet savoury, friendly and interesting. The Matar CB is a red Bordeaux blend; the 2013 is rich, soft, fruity and chocolatey, with warming alcohol. This year they’ve also come out with a Chardonnay, produced in 2014, under the name Admon. The wine has a very restrained nose, which contrasts with a quite intense palate. The lees and oak influence are obvious, but it’s all pretty, with a very toasty tasty finish.

To come back to KFWE: despite my usual annual disappointment that their buffet menu is still heavily centred on carvery and sushi, this year I’ve come away feeling it was a worthwhile visit. I’ve discovered interesting new wines and retasted some superb classics. All in all, this tasting event is a great idea and I’m glad it’s becoming ever more popular, including among the more strictly Orthodox. But if it were infused with a bit more creativity, it would have even more potential.